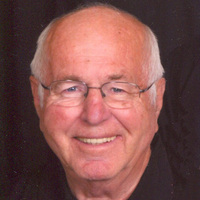 Donald Wylie, a longtime Sioux Falls realtor, died peacefully in his sleep on October 14, 2021, at Dougherty Hospice House.  He was 91.

Don Wylie was born July 22, 1930, in Frederick, SD to Chester and Mabel (Peterson) Wylie.  He attended country schools at Barnard, SD and Greenfield, SD.  He graduated from Vermillion High School in 1948.  He joined the Navy in 1948 and was honorably discharged in 1952.

On May 31, 1953, he was united in marriage with Ruth Marilyn Lien in Morris, MN.  The couple made their first home in Vermillion where they welcomed two daughters.  In 1956, the family moved to Hutchinson, MN and welcomed another daughter and a son.   Don worked for Larson Implement before becoming a salesman for Prudential Insurance.  In 1973, the family moved to Sioux Falls, SD where Don began his realtor career which he continued until retirement in 2010.

Don was a member of Our Saviors Lutheran Church and the South Dakota Amateur Softball Association Hall of Fame.  He loved spending time with his family and in the summers, you could find him on the softball fields.  For many years, he enjoyed having coffee and breakfast with his friends and neighbors at HyVee.  Don enjoyed travel and spent 7 winters in Mesa, AZ with his wife.  He was a faithful fan of many sports, especially the games played by his son, grandchildren, and great-grandchildren.  Later in life, he looked forward to annual family reunions at Lake Shetek in Slayton, MN.

Cards may be sent to: