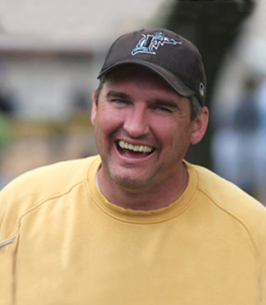 Funeral services will be 11:00 a.m., Monday, March 22, 2021 at Holy Name of Jesus Catholic Church in Watertown with Father John Fischer as celebrant, Erika Davis as soloist accompanied by Jane Rokusek.

Lunch and fellowship at the Knights of Columbus following the interment.

Interment will be Mt. Hope Cemetery in Watertown.

Out of respect for Jeff’s family, masks are required for all events. Thank you for your consideration.

Honorary Pallbearers will be all who have been coached by Jeff.


Jeff was born in Columbus, Ohio on October 21st, 1966 to Raymond and Pat (Lueck) Denzer. Throughout his life he attended 17 different schools in 8 different states, and graduated from Palmer High School in Palmer, Alaska.

He moved to Winona, Minnesota where he graduated from Winona State University with a Bachelor of Science degree in teaching. It was there that he developed a strong love and passion for coaching youth sports, and also where he met his one and only girlfriend, Julie Plaisance, who later became his wife on June 18th of 1994.

They moved to Watertown in 1995 and brought 3 amazing children into the world, Macy, Jake, and Drew. Jeff was a high school social studies teacher and coach in Watertown and Henry, SD, the assistant recreation director for the Watertown Park and Rec Department where he had the opportunity to coach thousands of children in a variety of sports, and was currently serving as the office manager for Grangaard Construction Inc. As a coach, one of his biggest accomplishments was coaching the Jurgens Printing softball team to 5 national titles and 7 state championships. After his 32 years of coaching, he was proud to say that he played every kid in every game, no matter the circumstances. His goal was not only to win, but more importantly, to provide every athlete with the opportunity to better themselves both on and off the field.

He was a member of Holy Name Parish in Watertown.

He was preceded in death by his father Raymond and maternal and paternal grandparents.