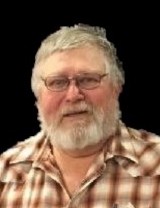 Rodney “Rod” Binger of Aberdeen, SD passed away Friday, February 5, 2021, at his residence.  His funeral service will be 2:00 pm on Saturday, February 13, 2021, at the Tulare United Church.  Pastor Lorah Houser Jankord will officiate.  Burial, with military honors, will follow at St. John’s Lutheran Cemetery, Tulare, SD.

Visitation will be two hours prior to the service at the church.  Masks and social distancing are recommended.  The funeral service will be live-streamed to the funeral home’s website.  Arrangements have been entrusted to Hyke Funeral Home of Redfield. (www.hykefuneralhome.com)

Rodney Roy Binger was born May 6, 1949, to LaVerne and Minnie (Carlson) Binger in Redfield, SD.  He grew up on the family farm near Tulare, SD.  He attended Tulare Elementary School and graduated from Tulare High School in 1967.  During his time at Tulare High School, Rod was part of the 1965 State Championship team for the Redfield American Legion Baseball team.  After graduation, Rod continued his education at the Wahpeton Trade School for Diesel Mechanic.  During the time at Wahpeton, Rod was one of the 14 students to participate in the 34th Annual Golden Gloves Tournament.

Rod was enrolled in the Army National Guard for 12 years. He married Pamela Arthurs on July 28, 1972 and to this union two children, Leonnie and Jamie, were born.  In 1978, Rod married Shirley Werth.

Rod cherished every moment he could spend with his children and grandchildren, whether it was family gatherings, holidays, or camping trips.  He was a devoted follower of his grandchildren’s sporting events.  He was their greatest fan.

Fishing was a passion, both on the ice and in a boat.  He had a love for food and loved to bake.  One never knew what he was throwing together, but it always turned out amazing.  Rod was an avid collector of diecast classic CHR models.  He spent plenty of time and worked hard assembling each one and he had also collected a very eclectic coin collection.

Rod was a simple man who enjoyed the simple things in life.  He always looked forward to his daily gatherings with his “Coffee Crew” at Marlin’s Restaurant in Aberdeen, where many memories and stories were exchanged.  He cherished all his crew.  Rod was also a lifetime member of the American Legion.

Rod’s lifetime of hard work and his love for his family will be his lasting legacy.

Rod is survived by his mother Minnie Binger of Sturgis, SD; brother Ken Binger of Sturgis; sister Linda (Kip) Matkins of Rapid City, SD; children: Leonnie Binger and Jamie Binger, both of Redfield; and grandchildren:  Bradyn, Alexandra, Sage, and Aidyn.  He is also survived by his “Coffee Crew” gang at Marlin’s and best friend ‘til the end, Pam Nelson, his first and only true love; as well as many nieces and nephews.

He is preceded in death by his grandparents and father LaVerne Binger.